It’s the final, hot days of summer before we head into the chilly, windswept days of fall. I have lots of exciting books planned for you to curl up with this fall, so in the meantime, why not see the summer off with a sexy angelic adventure in my new book, Heaven Sent? 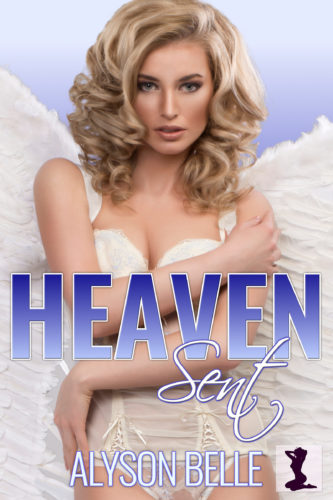 He messed up his first life, but that’s what second chances are for… even if this time he has to do it as a woman.

When Rick, a high-powered, rich financier, unexpectedly arrives at the gates of heaven and is denied entry because of the self-centered way he lived his life, all he wants is a second chance to make up for past mistakes. He’d always intended to be more generous and kinder to people—he was just planning to do it in his golden years. When the angels give him the chance to go back to Earth in a young, fit body and prove the truth of his intentions, Rick eagerly accepts. Getting to be young all over again while keeping all of his accumulated wisdom sounds like a great deal, and he can hardly believe his luck.

But when Rick wakes up in a dirty Los Angeles alley in the body of a gorgeous, female twenty-something with no money, no I.D., and no apparent past, he immediately begins to regret his choice. How is he supposed to prove how generous and kind he can be without any of his prior wealth or friends? How is he supposed to support himself with no way to get a job and no resources at his disposal? And how on Earth is he supposed to adjust to being a petite, delicate woman when he’s spent decades as a confident, powerful man?

Rick quickly discovers that being a woman is very different from the life he’s used to, in ways that are both frustrating and humiliating. The only person who gives a damn about him now is Luke: the strong, warm-eyed bartender who takes pity on the pretty, bedraggled girl and gives her a place to stay and some money to get back on her feet while she figures out her new life. If only there were something she could do to repay his kindness…

To celebrate the end of summer, I’m doing a two-day special giveaway of my fan-favorite story Exchanji, about a group of college kids who head off to the woods for a weekend that’s even sexier and wilder than any of them could have hoped for. Don’t miss it, TOTALLY FREE on August 18th and 19th only!