Two of my most popular series continue with my recent releases of Jungle Heat (Book 4 of Gender Swapped by the Witch Queen) and Preggers in Space (Book 2 of Gender Swapped Science Fiction). Whether you’re into steamy fantasy settings or sexy science fiction, you’re sure to enjoy these stories! 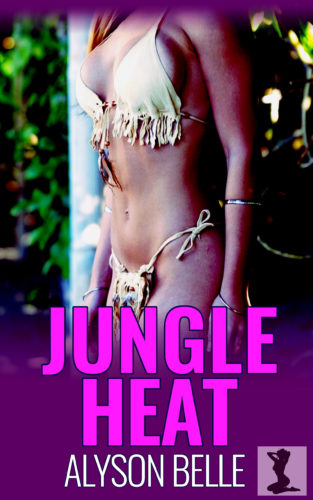 The great chieftan Azlato has been tricked, exposed, and trapped while his betrayers draw ever closer to ending the life of the woman who stole his body, and if they succeed, he’ll be stuck as a pleasure maiden and forced to carry out the whims of the pleasure mistress for the rest of his life! Powerless to stop them in his tiny, feminine form, he awaits the inevitable while the men have their way with him in the stocks at the center of camp.

In the nick of time, a familiar ally rescues him and carries him into the steamy heart of the jungle, where they’ll seek the help of the mysterious tribe of dark-skinned warrior women known as the amazons… but the help of the amazons does not come without a price, and their appetites for both men and women are insatiable!

Can Azlato reach his enemies and swap back with the witch queen Katjaka in time to save himself from a fate worse than death, or will he be doomed to spending the rest of his days pleasuring men and women in the heat of the jungle night? Find out in the exciting conclusion to the Gender Swapped by the Witch Queen series!

Captain James T. Mitchell is now trapped in the body of his co-captain, Lana King, and has successfully undergone the first step of their mission to repopulate Earth! The aliens that have resurrected them have confirmed that he is definitely expecting a little bundle of joy, despite still adjusting to the new realities of life as a woman.

But that’s not the only adjustment he has to make—living as Lana brings a whole host of other complications, such as having to obey the wishes of his new, male companion, and dealing with being only one of a harem of eager, nubile space women as the aliens continue to introduce new mating stock to the luxurious garden at the center of the ship. Even worse, he’s starting to suspect that it may have been no accident that he wound up as Lana…

Is it possible that his co-captain stole his body and forced him to become one of the harem girls so that she could enjoy all the perks of being the harem ruler in their space garden? And what can James even do about it, trapped as he is in the helpless body of an expecting harem babe? He’s going to have to get creative unless he wants to spend the rest of his life mating with his old body and the other girls, trapped and preggers on an alien space station!