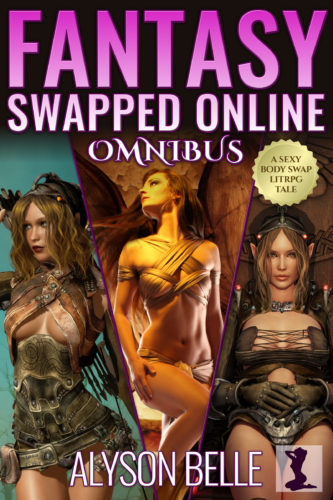 If you’d like a little taste of what’s inside of VR Gender Swap, enjoy this naughty preview of some of the fun times that Mike… er, Mikala… has in store for her!

Two weeks passed before Michael found his chance to try out his step-sister’s VR machine, but then one night it finally came: Kyla had a sleepover party for a friend’s birthday, girls only. There was no chance she’d jack in that evening. Michael didn’t waste a minute. As soon as his father pulled away from the driveway with Kyla in tow, Michael raced over to his chair, hastily jacking into virtnet.

He found himself standing in his own virtnet lobby this time, wearing the same old grey default avatar as always. The room was remarkably like Kyla’s had been: a coffee table, a sofa, a cabinet. He’d never bothered to pick a decoration scheme, though, so he was stuck with boring defaults. Blue canvas couch. Industrial grey steel cabinet. Low, grey carpeting. More like a dentist’s office than the luxurious parlor Kyla enjoyed. Michael made a mental note to change that later.

He walked up to the glass wall across from the couch and tapped it once. His muscle-bound action hero avatar stared back at him, black crewcut tight and high, square jaw set in a growly grimace. He even wore a bandana around his forehead and dressed in military fatigues by default. Jungle Jim, the model was called. Michael stuck his tongue out at it. It was fine for action games, but so not what he wanted right now.

He tapped the screen again and whisked the password prompt to the side so that he could log into a different account. Jungle Jim faded into swirling mist. With trembling fingers, he typed in Kyla’s credentials. When he tapped again, the login screen whooshed away, and the swirling mist parted once more to reveal Kyla’s super-hot virtbod. The avatar looked just like he remembered: taut, rounded thighs, high breasts, and long tan legs, bound up in that tight white shift. Just like a present waiting to be unwrapped.

Michael’s hand hovered over the screen. He suddenly had the disorienting sensation of feeling aroused in an avatar with no physical way to express it. Well, there was an easy way to fix that. He tapped. END_OF_DOCUMENT_TOKEN_TO_BE_REPLACED 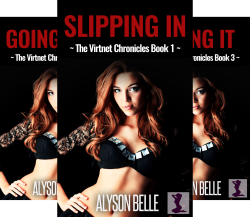